Could this be... The Last Great Adventure Game?

Andrew and I have met up a few times, over a romantic burger and beer, to discuss Simon's late projects. Just this weekend he was awarded the grand 1st prize in Creative Assembly's Franco Jam - a Game Jam dedicated to the infamous Simon Franco and his love for all things that level up and go "You Win". Andy also designed the incredibly trophy that was given away as first prize... ... ... ... I see some undesirable spam appearing in Andy's mail this week...

It was incredible to see the guys at C.A. live stream for two days solid and pull their hair out at Gloop Troops and Crimbo in the early hours of the morning. It makes me incredibly proud and honoured to be the brother of someone who meant so much to so many good people, and to know he had so many people around him that cared about him and would take their own weekend, and all of it, to pay their respects to him.

With that said, our limits know no bounds other than my currently dated hardware config which is due an upgrade and we're already steam rolling ahead with more games in honour of the man and legend... Gloop Troops 2? You shall see the light of day. You shall be available to grace the thumbs of many! But what's this? A new adventure game? Shhh..ould I tell?

With Andy's blessing. There's a new game in store for you all. Design is finished, art is underway, and boy is it going to mess with your little minds. Simon loved Adventure games, mind you Simon also loved:

But we've gone with the Adventure game... The mighty adventure game, and it's certainly looking awesome on the forest it's been printed on. What's more, it'll be free, that's right. FREE! As always! And available on PC & Mac, pending any breakdowns, and available next year with the hope to have it available on Simon's birthday, December 13 2015.

Now why am I telling you this all now? Well, we're doing this for charity. Winston's Wish is a charity that helps bereaved children and we could not think of a better charity to put our best efforts forward towards. Simon has two daughters, the youngest, Essy, who he never met and we want to make a small difference by raising as much money as we can during and after the development process through private donations or our certified and completely legit Just Giving page - that way you can be sure we don't squander it on mint condition cartridges and store brand soda.

The website for the game, along with Facebook page and Just Giving page will be up in a few days and we'll be hoping that you can give anything you can, however small or large to Winston's Wish now, or later if you like. This is an on-going project and we'll be posting updates (with no spoilers) on our Facebook page as development progresses. There'll be no pressure to donate during the game play, but we have already factored in to our design a way to let our cause be known, without diluting or breaking the flow of gameplay and to raise as much attention as we can to what we are doing and why we are doing it. No ugly banner ads or nasty splash screens to make you feel any moral pressure! You'll just be: Running, and enjoying.  Now that worth a Smiley! :D

Full details will be provided in the next post and then I shall relieve the Little Shop of Pixel's blog of all posts related to our adventure title as it returns to the Gloop Troop sanctuary that it is!

Now go dig out your spectrum, change that fuse in that plug as it's most likely in breach of fire code and whack up that loading screen for it's harmonious chorus of noise! Listen to that beast purr!

It seems it's been a while since anyone has posted here so I thought I would write a little something and introduce myself. I'm David, Simon's brother and new fellow Troopie.

Sadly Simon, (my brother and video game mastermind) passed away back in June from cancer and has left many of the projects he was working on unfinished. We're all deeply saddened by the loss of Simon as he was loved by all, unboundedly creative, was a fantastic brother and friend and just a good laugh to be around. He did fortunately however, pave the way for many future projects and we intend to keep his torch burning.

Recently I've met with Andrew, the brilliant and accomplished artist behind the series and was asked if I would help pick up where Simon left off and deliver a game he could be thoroughly proud of. While neither of us are Speccy programmers and have revisited the design of GT2 and are excited to make some announcements shortly! Progress is looking like it's stepped up a gear since the boys are no longer screaming over spectrum limitations and we are pleased to say we're pushing Gloop Troops forward a few years - but - not many! Fear not Retro junkies!

Since I come from a background of console music production, one of the first things I've been exploring is getting GT2's soundtrack up to par and early tracks are sounding promising! We're both fired up and ready to go, and we're confident this is going to be an epic title in honor of Simon.

All 6 parts of efwagames Crimbo playthrough are now available on Youtube!

Lots of progress has been going on with our code port from z80 assembler to the Z88dk C compiler. Some of the SP1 library took a little getting used to, and I don't think we're maximising our memory usage just yet. Andy had done some work on having our map editor export to a new format (an array C structs), and we'll need to tweak this a little further. However the good news from all this is that hopefully we can start putting screens together of our new game!

For GT2 I think we're going to wait and see how we get on with our first Z88dk game - I'm sure we'll hit a few brick walls trying to get our first game done. It's better that this first game is simpler in structure than GT2, as GT2 made heavy usage of the 128ks paging mechanism (and had a pretty complex compilation process where some code had to be re-compiled several times!).

We hope you are all enjoying the holidays! Efwagames has a posted a several part video playthrough of Crimbo!

Mock up of Crimbo on the PC Engine by Sunteam

A fantastic mockup of what Crimbo would look like on the PC Engine was posted on Twitter by Paul from Sunteam! 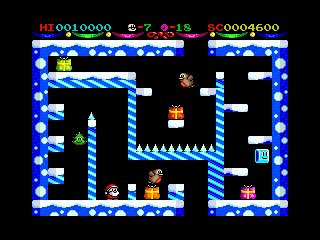 Check out his site to see more of his stunning art work!
Posted by Si at 20:21 3 comments:

Today Crimbo was posted over at Indiegames.com! We're very proud of the warm reception our festive game has been getting!! :-)
Posted by Si at 21:02 4 comments:

It was fastastic to see Crimbo reviewed in this month's Retro Gamer! We were doubly pleased to see it score 80%!

In other news we're busy sorting out our tech to power our next batch of Spectrum games, hopefully we'll have some screen shots we can share soon!
Posted by Si at 21:09 5 comments:

Welcome to the LSOP blog

Creators of the finest quality retro games...
...and here is our news!